Two great Will Rogers quotes below; and a few thoughts I’m left with on dogs and Alaska.

“If there are no dogs in Heaven, then when I die I want to go where they went.” – Will Rogers

“Of all the great Eskimo innovations in hunting and traveling, probably none was more important than their use of dogs. Dogs became the Eskimos’ ‘sixth sense,’ their extra nose, ears, and eyes, which could smell a seal or hear a caribou long before a mere human. The dog made life possible for the Eskimos in the Arctic. ‘Without dogs,’ as the ethnologist E. W. Nelson wrote in 1887, ‘the larger portion of the great Eskimo family peopling the barren northern coast of Alaska would find it impossible to exist in its chosen home.’ “ – Will Rogers

As an aside, the bargain and bond between man and dog is likely as old and stronger in Alaska than anywhere in the world.  Dogs have been shown to have accompanied Native man on the migration journey across the Beringia Land Bridge from Siberia to Alaska over 10,000 years ago.  The Athabascan Native Indians that thrived in the Alaskan Interior were nomadic hunters and partnered with dogs for ‘traction and travel’ to carry meat and belongings from camp to camp.   The Inupiat Native Indians (often referred to as Eskimos) that adapted and thrived in the Northern coast, partnered with dogs more for hunting seal and caribou.   In all cases, the dogs asked only for the opportunity to work tirelessly in exchange for kindness and meals.

Shortly after the Great Serum Run of 1925, the airplane came of age and began to replace the dog teams for mail delivery and transportation in the interior of Alaska.  The introduction of snowmobiles/snow-machines in the 1960’s were a near final step in the inevitable transformation from dogs to iron dogs.  In Native villages of the Interior, the snow-machines are ubiquitous and do the work of checking traplines, hauling wood, and traveling between villages.

In the 1970’s, a group of Alaskans led by Joe Reddington recognized the need to promote and restore the heritage of the old trails and dog sled travel.   The Iditarod race and preservation of this trail system is a result of their efforts.  It’s a pretty amazing thing for a dog fan and outdoors fan to experience and appreciate.

I found a nice set of images (a few below) with a Google search at the following URL, click-through to view: 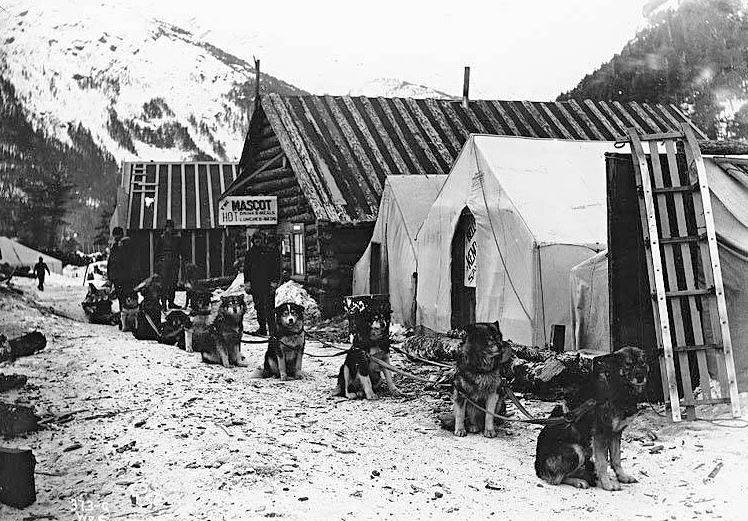 This year, the Iditarod ran the route of the 1925 Serum Run from Fairbanks to Nome.  The story of the heroic relay to transport the anti-toxin to stem the diphtheria epidemic is well told in “The Cruelest Miles: The Heroic Story of Dogs and Men in a Race Against an Epidemic” by Gay and Laney Salisbury.  I highly recommend it as a great read.

A quick, “Cliff Notes” read of the event can be found at:

The title of the “Cruelest Miles” comes from a letter of recognition sent by President Ronald Reagan to the 3 surviving members (surviving at that time, the last of the mushers passed away in 1999) of the dog sled relay teams recounting how:

“Together with 19 others, you traveled across some of the world’s cruelest miles to accomplish the impossible– and you did it in the name of humanity.”