Trent spent a little over 7-1/2 hours resting at Nenana and headed out at about 200 AM this morning.

As a reference, the dog teams can generally run 4-6 hours between rests.  Rest times depend on the conditioning of the dogs and how aggressive the musher feels, but are typically one to one.   If a team runs for 4-6 hours you can expect them to rest for 4-6.  Trent is resting more like 1.5 hours for each hour of run.

Trent broke the 90 mile trip to Manley Springs in about half, and according to the Iditrarod GPS Tracker (more on this fun tool later) stopped about about 8:00 AM today for about 7 hours and 45 minutes of rest.   He obviously camped on the trail with the team, and looks to have started back out at 4:00 this afternoon, getting in to Manley Springs at about 830 this evening.  That would put my estimate of his average running speed on the leg to be around 9 mph, right on target.

The team still had all 16 dogs in the race as they checked in to Manley.   Again with his late starting position and big rests, Trent is running at the back of the pack.   I wouldn't be surprised if Trent rests close to 8 hours again before heading down the trail to Tanana.   It will be important and encouraging to see all 16 dogs check out of Manley to head to Tanana, and for a strong 66 mile run.  If the team is coming together, I think Trent will try for a strong run with slightly less rest to Tanana.

To get our bearings straight, a map of the 2015 Iditarod is below.   Remember that the race start was moved from Anchorage to Fairbanks due to lack of snow in the Southern Alaska interior.   The course from Fairbanks very closely matches the actual "Great Serum Run" of 1925 that inspired the race.   Go back and "google" the story or even read the book "The Cruelest Miles" if you don't already know about the Diptheria epidemic in Nome that year and the heroic effort to transport the antitoxin to stem the epidemic.  Twenty dog mushers and 150 sled dogs relayed the serum across 674 miles in five and a half days. 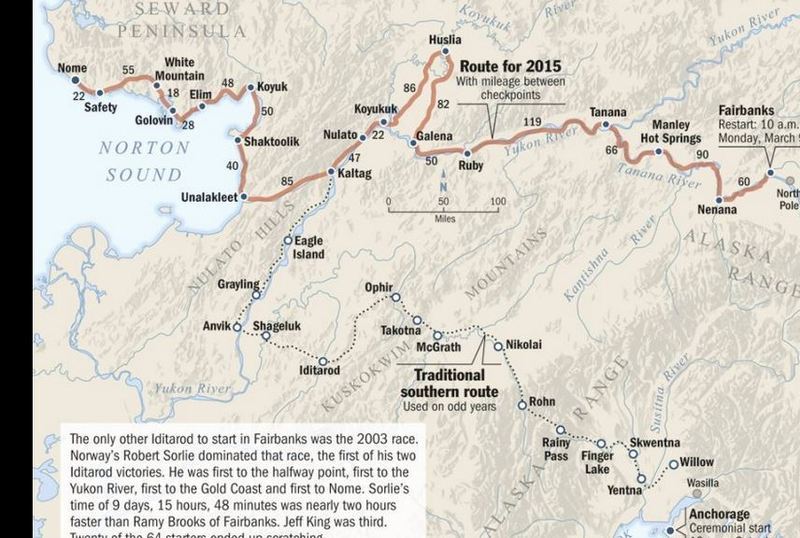 The first checkpoint in the race is the village of Nenana.   This is where the 20 pound package of serum wrapped in quilts came off the railroad from Fairbanks and was handed to the first musher "Wild Bill" Shannon who ran the first leg of the journey.  Picture below of the Nenana rail station and a look down the Nenana River west toward the Yukon, and on to Nome.   Also a picture of the famous "tripod" which is the source of wager in Alaska as to when the ice on the Nenana River will finally break.   The tripod fell last year on April 25, and the winners who picked the date and time (to the minute) split over $300,000.  The wager on the tripod has been going on for over 90 years. 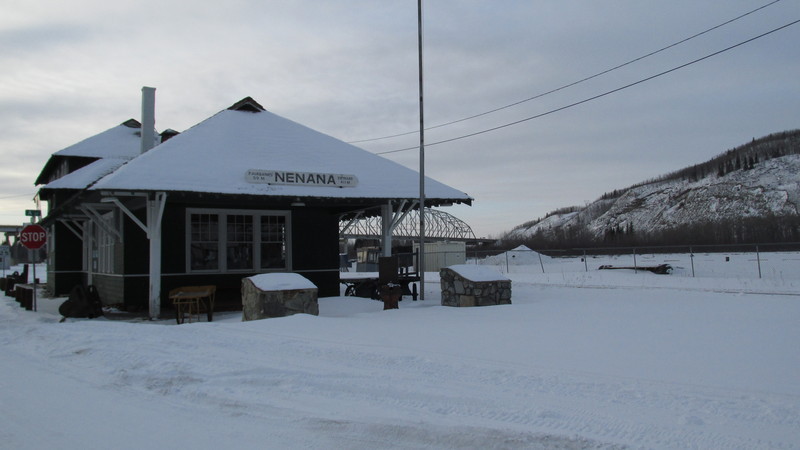 By the luck of the draw of starting order, Trent left Fairbanks 75th out of 79 mushers.   He made the 60 mile trip from Fairbanks to Nenana in about 6 hours 5 minutes averaging 9.9 miles per hour arriving at about 630 PM.  That time between the start and Nenana was about the middle of the pack.   You might remember that Trent has a team of 13 yearlings (actually about 1.5 years now) and 3 veterans and the main goal for the year is to finish, with as many healthy and happy dogs making their first trip down the trail.  Trent intends to rest a lot early in the race, and he rested nearly 8 hours in Nenana.   Given his late start order and the rest schedule he intends, do not be disappointed or surprised to see him near the end of the pack for much of the first half of the race.  If the team is running well and coming together, I bet we will see Trent picking off teams one by one in the second half of the race and finish in the middle of the pack.

A few pictures of Trent and the team showing up in Nenana.   Check out Thomas growing an ice beard in support of his musher.  Trent and the team were back on the trail at 0210 AM Tuesday on their way to Manley Hot Springs.  It's a 90 mile journey along the Tanana River that Trent will likely break in to two 40-45 miles runs of 5-6 hours with a 7-8 hour rest between.  The other musher in 1925 who relayed the serum from Nenana to Manley Hot Springs with "Wild Bill" Shannon was Dan Green. 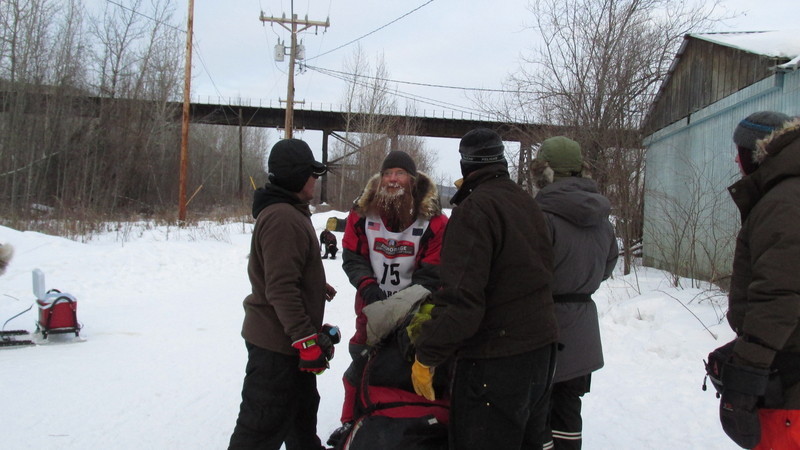 At about 1215, it was finally ‘go time’ and Trent left the shoot to head for Nome. 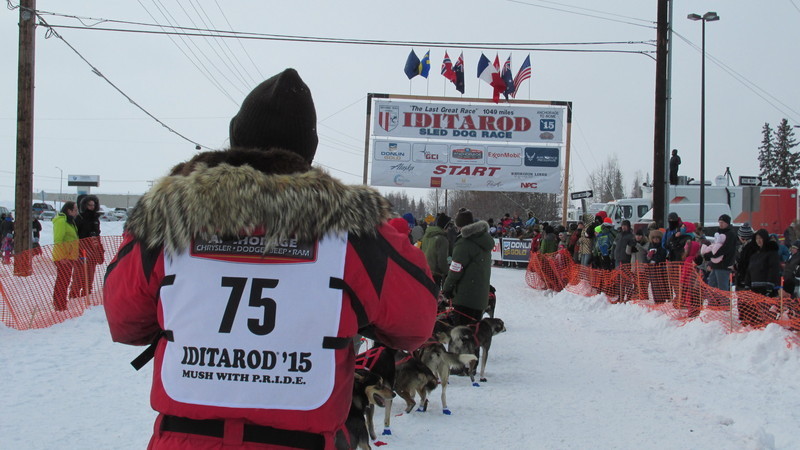 The Iditarod officially started yesterday, Monday 9th.  Apologies for just now posting any updates.  Trent has bib (starting position) 75 of the 79 mushers.  He wasn’t in a huge hurry to be early, so we got to the race paddock around the “be here by” time 800 AM.   One video of what 79 teams of 16 amped dogs looks and sounds like, and a few pictures, of getting the team and sled mobilized are below.   Final shot is Jake, Trent, Tim, and Greg right before hitching the dogs up. 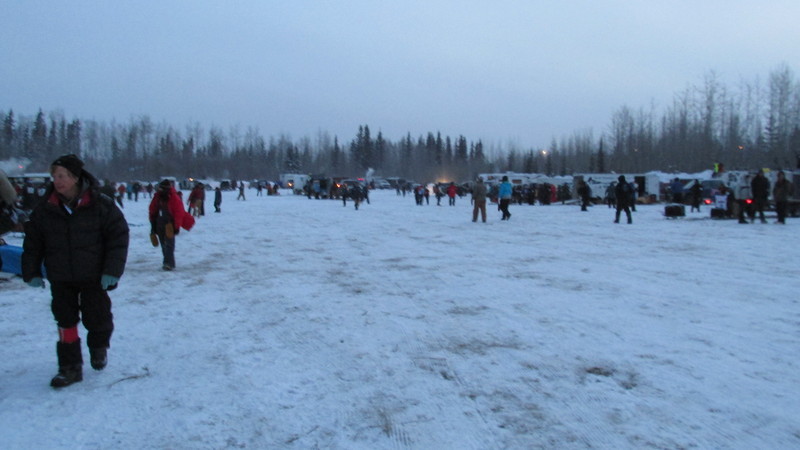 The Ceremonial Start was yesterday, Saturday in Anchorage.   The ceremonial start is Anchorage’s version of Mardi Gras and Super Bowl tailgate rolled in to one.

There has been so little snow in Southern Alaska, that the actual race start was moved to Fairbanks and will take place Monday, but the Iditarod would be hard pressed to not have the initial day of fun be in Anchorage regardless of circumstance.

On Friday night, they were still trucking snow to downtown and building up snow along an 11 mile course from downtown Anchorage to Campbell Air Strip.  At 7 AM Saturday, it was raining cats and dogs.   The sun came out shortly before the 10 AM start and 78 mushers had their names called and stories told on 4th Avenue and headed out to a wild and wet adventure.   Trent’s Iditarider was Dr. Gerald Elkhan, a retired North Carolina State professor.  It was Gerald’s eight time as an Iditarider passenger, and I suspect it was his wettest.  Our handler Jake Swift rode behind Trent in the tag sled.  Couple of shots from the start and a video below. 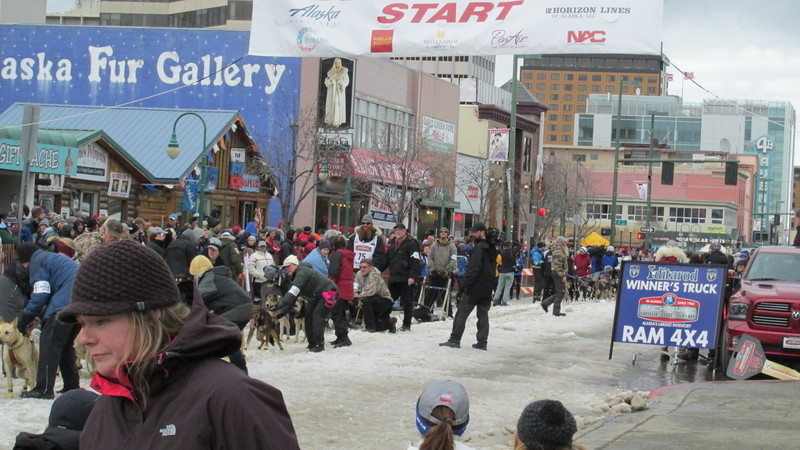 We decided to leave Anchorage immediately after finishing the Ceremonial Start stage, and were off on the 400 mile trip to Fairbanks for the actual race start, at about 3:00.   On the Parks Highway, about 50 miles before Denali Highway and Denali National Park, we ran in to one of the most intense, if not the most intense, snowstorms any of us Idaho snowstorm veterans has ever seen.   There was about 3 feet of snow that fell in a 4 hour period and the plows were unable to keep up with accumulation.  An Eighteen wheeler, and several trucks and cars ran off the road and the whole thing felt like being on the set of Weather Channel’s “Highway Thru Hell”.   It took us about 2-1/2 hours to make the 50 miles to the next bastion of civilization, Cantwell Alaska (pop 202).  Thank goodness we were able to make it the one mile off the Parks Highway to the Cantwell Lodge, which was open, had rooms, and a fine bar and burger.  Car next to the Cantwell Lodge, dug out and ready to go Sunday morning below. 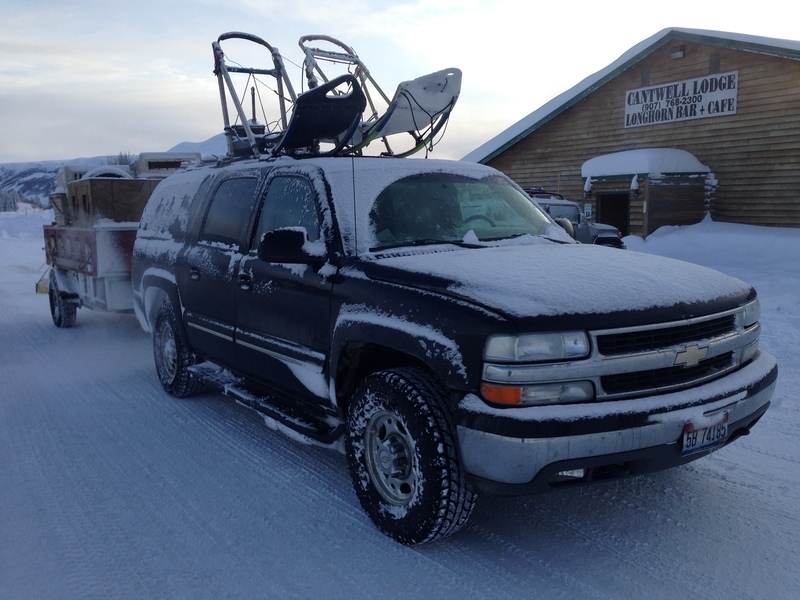 We made it the final 150 miles to Fairbanks at about 2:00.  Trent needed to pick up a few last minute items to prepare for the race.   We stopped at Cold Spot in Fairbanks, which can only be described as The Home Depot of Mushing. 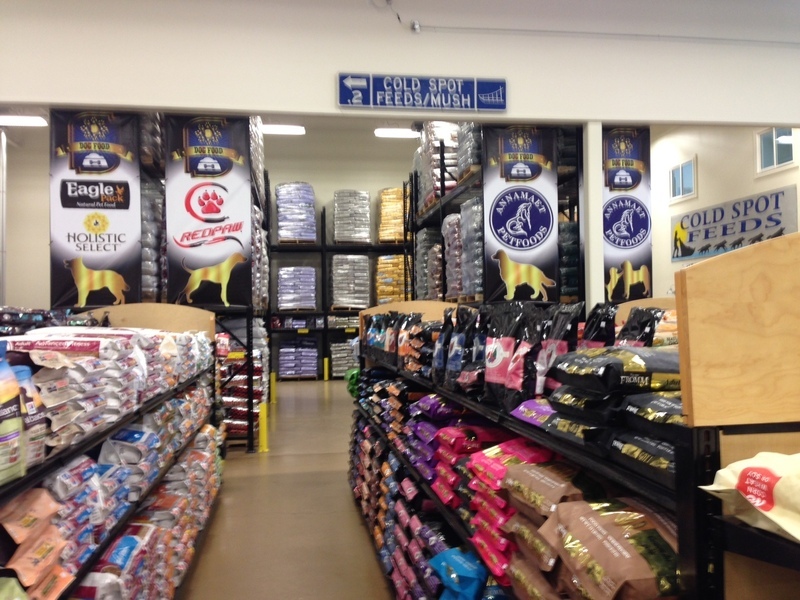 Tomorrow this all starts for real.  Trent looks ready.  The dogs look ready.  Belly Button and Loafer are the two dogs that didn’t make the final cut to 16.  It's going to be great for Jake, Greg, and I to be there to send them off tomorrow.  "Will send pix"

Our local paper in Ketchum, ID "The Idaho Mountain Express" did a nice article on Trent that was in today's/Friday's paper.  (it's a small town, they only publish on Wednesday and Friday).   Enjoy!

The Musher's banquet was last night, March 5.  The Musher's Banquet is the official social kickoff for the Iditarod.   Governors (Sarah Palin), senators, and a thousand crazed Iditarod fans pay $95 a plate to get a chance to mingle with the mushers and watch them draw numbers for the race starting order.  The mushers all have tables with their name and then later sit at a table to greet fans and kids.

Trent drew starting bib number 75 out of 80, to which he quipped, "All right, i can sleep in" 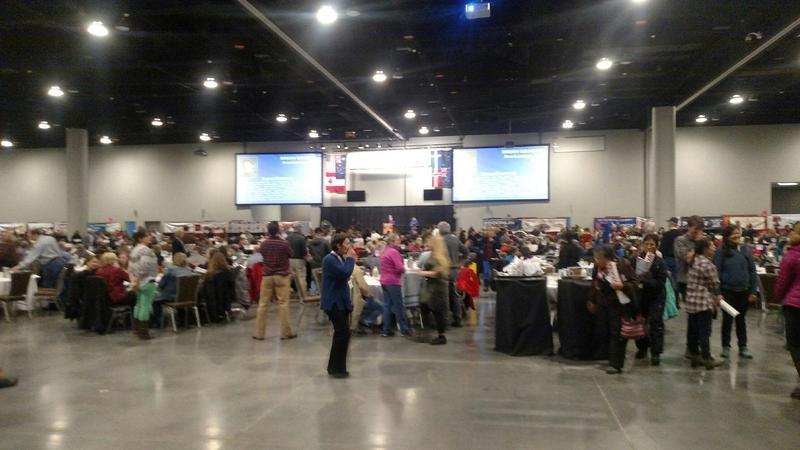 Remember from a previous post, that our handler Jake Swift and his buddy Greg left Idaho at about 2:00 AM on Friday 27th.  Four days later, yesterday 3rd, they pulled in to Anchorage.  Trent taught through yesterday, and flew up to Anchorage last night.

Pictures below of the boys on the road through the Yukon, and the Trent and the team today at the veterinary check-in for the dogs at Iditarod Headquarters. 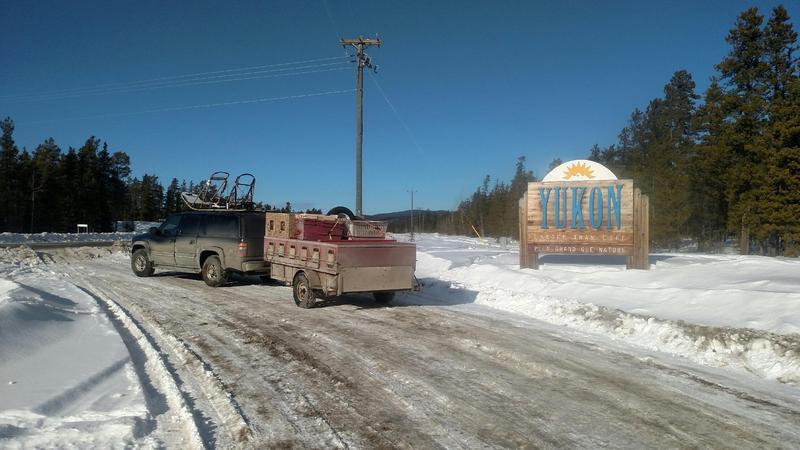 Trent's partner in crime, Tim here.   Trent has left for Anchorage, and I'm left with the blog pen.   Before he left, he put together this video (14 minutes of good stuff) of his class building and running the dog sleds that we looked at some in the last post.

Each year that I run the race, my students get involved helping me prepare. I also like to incorporate the race in to my teaching curriculum.  We've made Athabaskan snow shoes in years past.  This year, we built dog sleds and took them out for a run.  This was last Thursday Feb. 26th.   Pix and a couple of videos below. 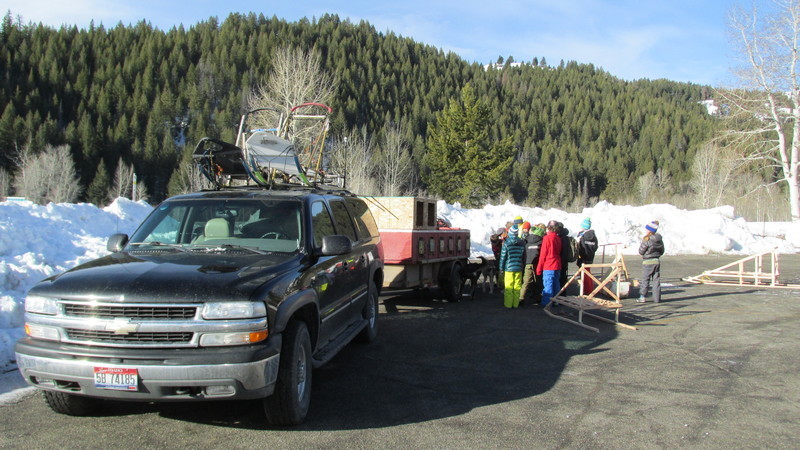